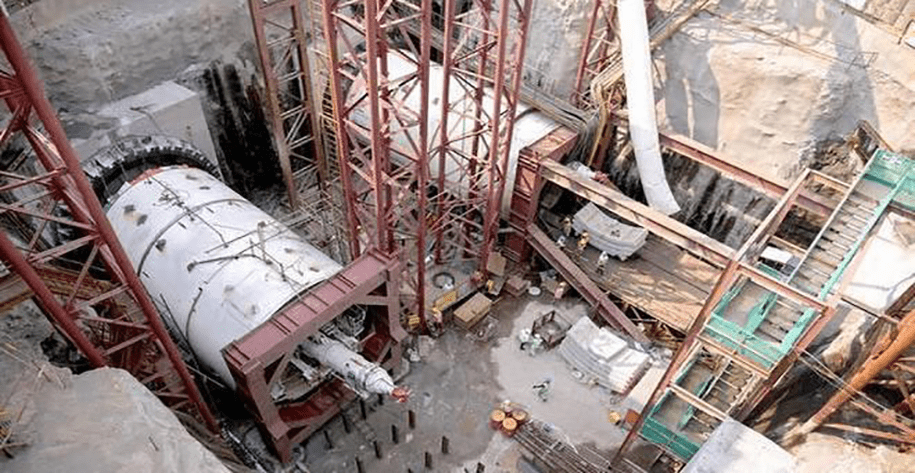 Mumbai: Work on constructing the first-ever tunnel in Mumbai for the fully underground Metro 3 line began at the Naya Nagar site in Mahim on Friday, with two more tunnel boring machines (TBMs) lowered to dig towards Dadar.

Naya Nagar is one of the seven ‘launching shafts’ from where tunnelling operations will be conducted. The others are at Cuffe Parade, Azad Maidan, Worli, Kalina, Sahar Road and Marol Naka. Azad Maidan is the next site where tunnelling work will start, said Ashwini Bhide, Managing Director, Mumbai Metro Rail Corporation (MMRC).

“This phase of tunnelling will be completed by 2019,” said Ms. Bhide.

In all, 17 TBMs will be deployed to construct the two 33.5-km long tunnels. Five TBMs have arrived in the city, one of which is still at the Mumbai port. Of the rest, three have been lowered into the launching shaft and one has started tunnelling. “By November-end, all five machines will be operational,” Ms. Bhide said. The first boring machine was lowered in September, and needed around 45 days to be assembled.

Seven machines, whose factory acceptance test has been completed, are in various stages of transit. The factory acceptance for the remaining five will be done in the next two months. “By March 2018, every site will have at least one machine at work,” she said.

Tunnelling operations will be carried out 25-30 metres underground using an Earth Pressure Balance (EPB) device. “Mumbai sits on hard basalt rock, which is not mixed with soil. While this provides a certain degree of safety while tunnelling, it also increases the time required for the work,” Ms. Bhide said. Each machine’s speed will be between eight and 14 metres per day. “One can expect a daily average of approximately 11 metres of tunnelling,” she said.

Ms. Bhide said that Mumbai’s linear design left them with no option but to work on the main thoroughfares, which makes it more challenging to build a Metro in Mumbai as compared to other cities. The Metro stretch from Aarey Colony to Bandra Kurla Complex (BKC) will be commissioned by June 2021, while the entire route is expected to be completed by December 2021.

GO TO THE ARTICLE

BLS and Stadler sign contract for the acquisition of 52 new trains.

Development of a Road Database of Montenegro – Kick off meeting.

Spea Engineering in Podgorica, Montenegro for the Kick-off meeting of the project Development of a Road Database of Montenegro

ACCIONA has won a significant contract to build the new Cebu-Cordova bridge in the Philippines, marking the company’s second